TTF Ahmedabad concludes with a growth of 10% from last year 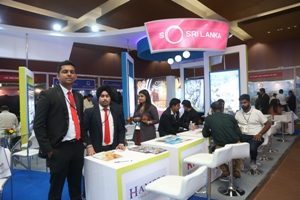 TTF (Travel & Tourism Fair) Ahmedabad 2019 concluded on a high note with a bumper response of over 9,000 visitors, registering a growth of 10% over the first two days from last year. With two full days reserved for B2B, over 6,000 travel trade visitors attended the show. The last day of the show saw a footfall of over 3,000 general visitors.

The three-day show in Ahmedabad which is the largest trade show in the multi-city TTF series kick-started business for the busy Diwali holiday season in the exhibition halls of Gujarat University on August 30, packed to the brim.

Bringing together over 700 exhibitors from 23 countries and 27 Indian states & UTs, the three-day travel and tourism extravaganza is a well known one-stop-shop of travel and tourism products in Gujarat. It showcases destinations, tourism packages and travel products to help globetrotting Gujaratis plan and book their holidays.

Speaking to the media, Jenu Devan said, “I’m visiting TTF Ahmedabad for the last few years and the way they have received participation this year is very good. It’s through their constant effort that they have been able to get this increased participation. The tourism boards from the countries who have participated here have come with good delegation along with them. For Gujarat Tourism, around 20 participants are here along with us. I am very happy that they are selecting Ahmedabad as a platform for the exhibition for many years now and they have also started the TTF Summer in Ahmedabad which is a very good initiative. I hope that they continue this particular relationship for the years to come and I wish them all the very best.”

TTF Ahmedabad was a great networking opportunity for the travel trade from all over Gujarat and the Western India region, offering exceptional deals for travel enthusiasts and business travellers. Tourism Boards, hotels, resorts, travel agents, tour operators, online travel agencies, railways, cruise lines and many others were in attendance.

TTF Ahmedabad has time and again emerged as the biggest show in the 8-city TTF series in India as it serves the booming market of Ahmedabad and Gujarat. Besides Ahmedabad, the event is visited in large numbers by travel agents and tour operators from proximity markets in Gujarat like Vadodara, Surat, Rajkot, Bhavnagar, Jamnagar, Valsad, Navsari, Vapi, Bharuch, Ankleshwar, Anand, etc. through the cooperation of a large number of local travel trade associations.

Regular participant, the Ministry of Tourism was present this year along with private stakeholders, under the theme ‘150  Years of Celebrating the Mahatma’.

Participating for the first time, Indonesia Tourism received an overwhelming response at Ahmedabad and organised a destination presentation on the second day of the show, outlining its programmes and campaigns for introducing new destinations and increasing tourist numbers.

Manipur Tourism showcased a curtain raiser of Shirui Lily and Sangai Festival with traditional dance performances. They invited travellers from Western India to come and experience the beautiful cultural festivals in the state.

Rajasthan Tourism also organised a roadshow on the second day of the show and presented their state to the travel trade from the region.

On the closing day, awards were given to the participants of TTF in various categories.