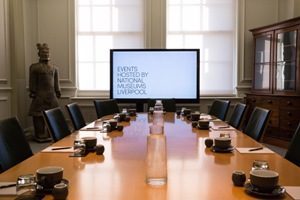 The venue hires and events division of National Museums Liverpool has added a 20-capacity boardroom to its portfolio alongside the Lower Horseshoe, an impressive exhibition gallery space spanning approximately 1,000 sq. ft. The team has been granted exclusive use of the two spaces for a three-year period.

Previously used for exhibitions and events including the 2018 blockbuster China’s First Emperor and the Terracotta Warriors, the Lower Horseshoe will now be open for private events ranging from conferences to weddings, with capacity for up to 600 guests.

Head of Events at Hosted by National Museums Liverpool, Katie Roberts said that they are so excited to welcome two additional events spaces in one of most popular venues, World Museum. Located in the heart of the city centre, it’s already home to some fantastic locations including the ground floor Sir Richard Foster Wing, a newly refurbished aquarium and a planetarium. The Museum itself is steeped in history, advancing and adapting over the years to become what it is today, particularly following its redevelopment after suffering a huge fire during World War II.

With bookings now being taken for the Boardroom and Lower Horseshoe, this additional venue hire offer will contribute to Hosted by National Museums Liverpool’s existing portfolio of impressive events spaces spread across eight venues within the city and its surrounding areas.

Katie added that every year they reassess their venue hire offer in a bid to provide guests with something a little different, helping to raise our profile and become one of the country’s leading destinations for business tourism and hospitality. These two new spaces will allow us to host more events annually as part of World Museum’s next chapter, which is particularly important to us as any revenue generated goes back into National Museums Liverpool to support the amazing work that it does. It’s fantastic to be able to show these historic spaces in a different light, and a testament to the diversity of museums and galleries.