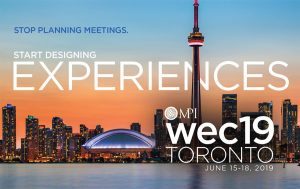 Toronto is hosting Meeting Professionals International’s World Education Congress (MPI WEC). MPI WEC is taking place at the Metro Toronto Convention Centre from June 15-18. Toronto is capturing the world’s attention thanks to the energy and excitement surrounding the Toronto Raptors and the NBA finals.

Toronto’s meetings, conventions and events industry is an economic driver for the city. In 2018, business events generated U.S. dollars 565 million for the Toronto regional economy. More than 500,000 delegates from around the world stepped in Toronto in 2018.

As per Tara Gordon, Vice President, Business Events at Tourism Toronto, it’s a remarkable time to experience Canada’s Downtown and an even better time to host a live audition for future meetings and events.

In 2018, Toronto hosted more international delegates from MICE than any other city in North America, ranking 7th globally – the only North American city in the top 10. Toronto was also named Canada’s top convention destination by Cvent in 2018, and is one of the top-ranked meeting destinations in the 2018 Watkins survey of top meeting planners.

MPI’s World Education Congress is a convention that brings together leaders in our industry. 2,500 attendees are expected for MPI’s WEC, with the majority of delegates coming from the U.S.

As per Lorenz Hassenstein, President & CEO at the Metro Toronto Convention Centre, Toronto is a top destination for meetings in North America, and we look forward to showcasing the world-class experience that meeting professionals can expect from our multifaceted facility and city.