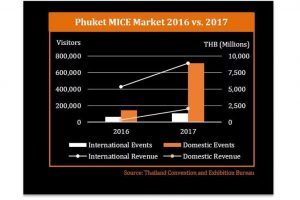 The MICE market of Phuket nearly doubled in year-on-year growth in 2017. The revenue from this segment rose from Thai Baht 5.9 billion to Thai Baht 10.9 billion. The average spend per person is Thai Baht 13,000.

Direct flights by GoAir between the Phulket’s resort destination and Mumbai, New Delhi and Bengaluru have further boosted the Indian weddings market.

He added that the expansion of the gateway airport has induced broader demand.

In 2018, the Laguna Phuket Marathon attracted over 8,000 participants while garnering considerable international visitors. Other notable events include the Laguna Phuket Triathlon and Thailand Yacht Show and Rendezvous.

They do not have a convention centre, but they have added 1,000-seat Grand West Sands Resort venue which is being managed by Hong Kong’s Langham Hospitality Group.

Central’s planned 10,000 sq.m. MICE facility in the heart of Phuket is expected to start development within two years creating a storyline of growth.