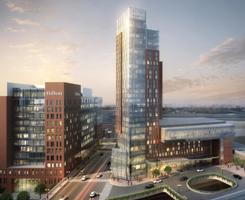 Hilton Columbus Downtown, owned by the Franklin County Convention Facilities Authority and managed by Hilton Management Services, broke ground on a 28-story tower to create the first 1,000-room convention hotel in Columbus. Together with the existing Hilton, the hotel will offer 75,000 sqft of meeting space and will be the largest hotel in Ohio when it opens in 2022. All meeting rooms will feature natural light, with flexible space and interactive kitchens to create inspiring meetings.

Designed by the architectural firm of Cooper Carry with interior design by Jeffrey Beers International, Hilton Columbus Downtown’s tower will be 28 stories including 463 guest rooms and 47,000 sqft of meeting space.

The addition of the tower to the Hilton Columbus Downtown will allow Columbus to attract new meetings and events business as per Don Brown, executive director, Franklin County Convention Facilities Authority.

During the milestone 100th year, Hilton has been named No. 1 on the list of the 2019 Fortune Best Companies to Work For in the U.S.